HELLS YEAH, six days, six nice events, but then shit happens and I drink too much and I feel down. That's life, I guess. One of the shits of course is the demise of live-playing THE JIM TABLOWSKI EXPERIENCE, and that's life, too. And death. But life and death belongs together, right? Wow, when I'm depressed I become SO philosophical! 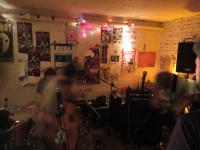 This review is in English, just like the last one of the first last show, 'cause Keith hasn't learnt a fucking word of German in the last three years or something, and that kind of laziness needs to be rewarded. 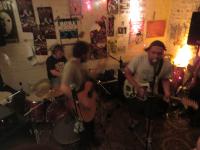 The pictures are done by Fö. I told him I forgot my camera and he just said he'd switch the flashlight off so the pictures would look like I'd made them. Nice! 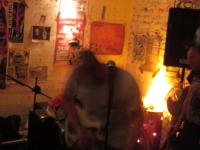 As you can see (or not, haha), The Jim Tablowski Experience plays as first band. That's a pity for a few late-comers, but since they start at 9pm and the show was scheduled for 8 you can't say it was too early, I guess. 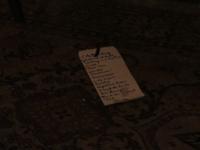 Hits. All of them. "Pockets" is missing, shit, but well, that song has such a nice music-video, it's okay, I guess. And then we get to hear "Should we make it extra-creamy", the title-track of their upcoming record and another song with a video that makes you forget your depressions for two minutes. 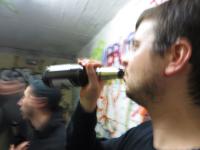 This guy seems to be quite old. Are those GREY HAIRS or is it just the camera? Creepy!!! 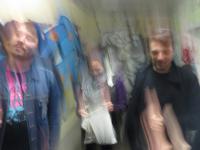 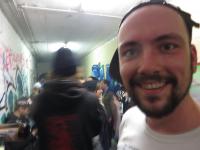 Markus seems to be pleased, too! It wasn't their best show - the best I've seen was in this very room in april -, but a nice one. Thanks, Jim Tablowski, you will be missed! AND JUST FORM A NEW BAND ALREADY, WILL YA?! 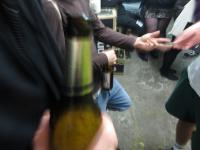 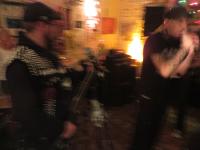 Second band: GROSSEBOMBEALLESWEG. They played with JTE a spontanous unofficial gig last year, and I was one of four people who showed up. It was great. Cool thing they play the last show, too, this time viewed by more people. 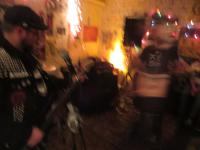 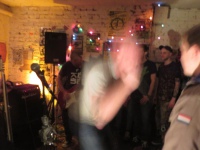 Guest appearance by a guy from Curb Stomp. I still don't get the whole skinhead-thing, but Curb Stomp is fun. 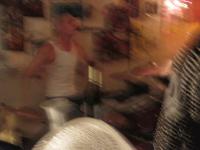 Drummer-pic. A very good one! 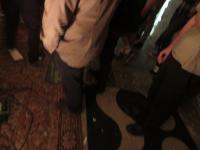 Even a shoe-photo! Fö has thought of it all to make it a real tenpints-experience! 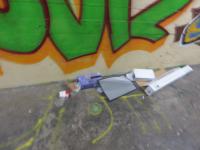 I don't get what this pile of rubbish is doing here, though. 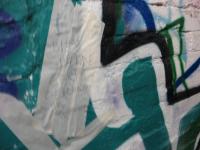 Beer 1 Euro, free entry, free mold on the walls, how could this gathering be even nicer? 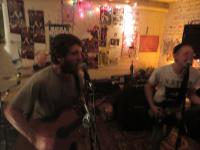 The answer follows: Keith's other band, SNITCH A SNATCH, are about to play. This is the first time I really enjoy them, don't know why. Very fast and hard hc/punk with blast-beats and acoustic-bass. 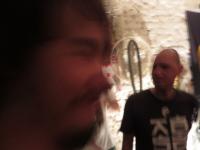 Timm enjoys the show as well. Everyone does. 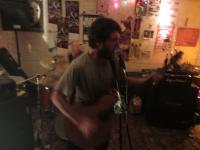 And everyone loves Keith! I don't know how he does that, seems to be some kind of MOJO! 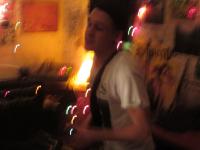 This guy loves Keith so much he can't stop telling us how sad he is. But what use is there of being sad? A lot! Hey, being sad can be quite nice actually. You should embrace your sadness and dwell in your despair. Sadness is a friend! Here's a video of a really wise guy who explains it all: CLICK ME I'M GONNA MAKE YOU LAUGH AND CRY 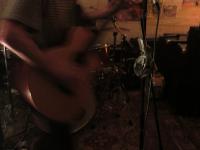 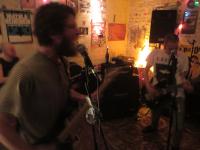 So Snitch A Snatch comes to an end, and I leave talking in english like a total moron and then about beer-brewing, I think. It was a nice chat. When I'm home I feel good.
When I wake up the next morning, "good" can't be the right word to describe the state I'm in. Or anything at all. I sit, and I let the sadness hit me like a truck. The good thing is: when you're hit by a truck, you're dead. When you let sadness hit you like a truck, you're still alive and feeling. And that makes you quite invincible, right? Thanks, THE JIM TABLOWSKI EXPERIENCE, thanks, SNITCH A SNATCH, thanks, KEITH. Good bye.
Bitte hier klicken, um diese Seite bei Facebook zu liken oder zu teilen. Mehr Infos, wie wir mit Einbettungen von externen Anbietern umgehen, hier.