Line-Up:
War With The Newts
Deadly Habit
The Suicided

War with the Newts (http://y2u.be/10pWH4E6tI4) Berlin's hardcore punk scene's new darlings War with the Newts have been hurling and whirling across stages since 2016, leaving behind a trail of happiness and destruction. For the last two years Kostia, Juan Alberto and Alex have toured, recorded, screamed and raged all across Germany and have now forced this chaotic energy into their debut album "Muerte мій Amour", released in November 2018.

The Suicided from Hamburg, Germany – that's fresh cruelty, between different genres as Sludge-Metal-Punk-Rock-Core, with much crabbing. We're all Suicided, as it was, as it is and as it will last. Governing towards the world apocalypse they serve you with infernal sounds, for answering the final questions. 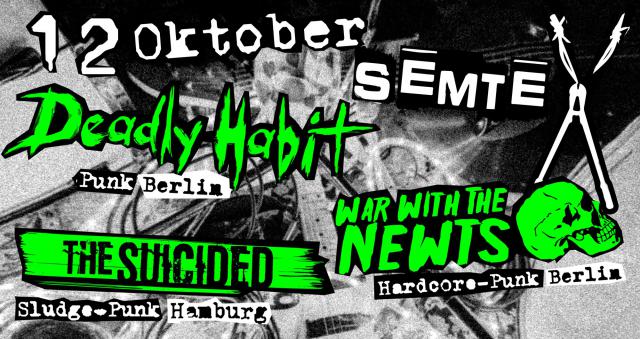